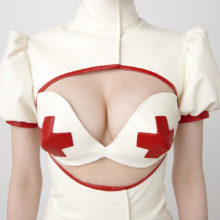 I grew up at Japanese housing complex called “Danchi” which epitomize Japanese life style
in high economic growth period (1960’s to early 70’s). Hundreds of young families were living in the dozen
geometric housing complexes, which were located on a hill in a suburb.
There were many married couples brimming with hope and their cheerful children. Every single person was aware
beneficence of economic growth there. I was a perceptive child in “lightness and shadowiness”
from the days of my earliest recollection. In the Danchi, the south side of building was with many flowers
and deciduous trees, and contrastive north side was mossy and ferny. Danchi was like sandwiches of lightness
and shadowiness. My optical sense (perceptiveness) was been sharpened with increasing age.
On another front, I influenced by fantastical works, that mirror people’s conflicts at economic growth period,
on my boyhood days. my youth imagination and creative power from my obsession has been a basis of my creation
as infantilism.

I regard “Conscience and Motive” as most important in my creation. “Conscience” is a judgment from
my rational nature, and “Motive” is a desire as an artist here. Needless to say, I sometimes judges
as an artist with conscience. Of course, I sometimes conscientiously prioritize a judgment as a creator
and has an idea rationally from bottom of my heart. It is quite risky to have it both ways on works,
and it makes them unsteady. However, I thinks that Conscience and Motive are opposite forces like
“yin-yang” and “head and tail” but they are interconnected to each other. I strive for creative activity
in brink of fine art such as coexist conscience and motive in the same work with an exquisite balance.

In late years, I have been executing works on the Japanese concealed culture and common practice.
These subjects are not raised for fine arts often. As an example, I represented “Cosplay made in Japan” in 1990’s.
At that time, cosplay was only for fanatic people and they enjoyed it simply in privacy. However, there are legion
of fans around the world at the present day. Also it is getting a representative of the Japanese pop culture.
It seems that I gravitate toward things, which exist between “lightness and shadowiness”,
as an artist and a scout of concealed culture. I create works, which go into depth by expressing human’s
“lightness (superficial) ” and “shadowiness (background) ”. Moreover, I create my inextricably linked
(lightness and shadowiness) world by Japanese concealed culture and common practice.