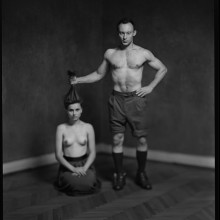 Polish photographer, born in 1975 in Szczecin, currently living in Birmingham, UK. In his work he mainly engages in portraits and creative photography. He usually uses large format camera with classic photosensitive materials but also x-ray films. He is a winner of a golden medal award in the Prix de la Photographie Paris PX3 and a laureate of 2012 Hasselblad Masters competition for the series of artistic wedding portraits. His works are being shown at several exhibitions in and outside Poland.