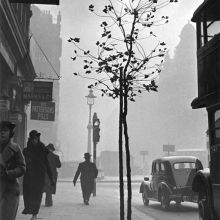 Wolfgang Suschitzky (born 1912), is a photographer and cinematographer perhaps best known for his collaboration with Paul Rotha in the 1940s and his work on Mike Hodges' 1971 film Get Carter.

Born in Vienna, trained as a photographer at Hohere Graphische Bundes-Lehr-und Versuchsanstalt. Under the impression of Austro-fascism, emigrated to the Netherlands in 1934 and to London the following year. As an enemy alien, was subject to a temporary ban on working. Co-founded DATA film cooperative in 1944.