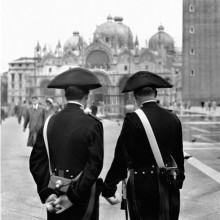 Wojciech Plewiński (born 31 September 1928 in Warsaw) is a Polish photographer.

He studied at the Sculpture Faculty of the Academy of Fine Arts in Krakow (1949–50) and the Faculty of Architecture at the Krakow University of Technology (1949–52). He obtained a diploma in architecture in 1954. A year later Wojciech Plewiński became a candidate for the membership of the Association of Polish Artists Photographers (ZPAF). He has been a full member of ZPAF since 1957. In 1950–56 he worked at the Studio of Monuments’ Conservation taking inventory of the dilapidated historic buildings in Małopolska.

In 1956–59 he worked as a photographer at the Research Institue of Animal Production (with Włodzimierz Puchalski). He has collaborated with numerous publishing establishments, among them “Tygodnik Powszechny” [famed independent Catholic weekly].

Since 1957, for 40 years, Wojciech Plewiński was employed by the “Przekrój” weekly magazine where he made fashion, portait, nature and documentary photographs. The 500 covers with portraits of women photographed by the artist became a trademark of the magazine.