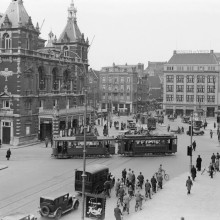 During his long professional life, Willem van de Poll occupied himself with press, travel and advertisement photography. He was also head of the photography service of the Netherlands Armed Forces and a photographer of the Netherlands royal family. He worked for press agencies and many journals and magazines. He also published a few albums. He travelled across Europe, Africa, Asia, South America. The National Archives in the Hague have collected approximately 30 thousands of Willem van de Poll’s negatives.