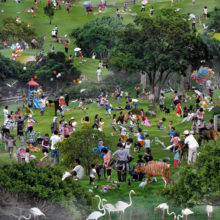 Dr. Vinci Weng (born in 1970 in Taipei. Lives and works in Taipei, Taiwan) is a practicing artist working primarily with contemporary photography, digital imaging and moving image. In an artistic practice spanning over thirty years, his research interests include modern painting, digital fine art and experimental animation. He adopts the concepts of painting, photography and cinema that addressed some interesting issues of digital art with possibilities to go beyond the limit of still and moving images. His digital still and moving image explores the surreal relation of the pictorial, theatrical and cinematic perspectives.

Weng is an Associate Professor at College of Communications, Chinese Culture University in Taipei, and one of the representative artists for YellowKorner (YK) Galleries based in Paris (headquarter) and other major cities worldwide. He is working on new digital-still images. His current practice focuses on the potential of the digital three-dimensional space as a virtual stage for manipulating and transforming two-dimensional photographic images through which to reframe the pictorial scenarios of the still/moving image. He is, simultaneously planning to continue the new research of post-photography in his digital-imaging practice.

wonder in the fields

travellers among hills in midsummer