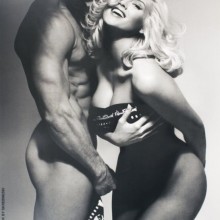 Victor Skrebneski (born in 1929 in Chicago, U.S.) is a photographer born to parents of Polish and Russian heritage. He was educated at the School of the Art Institute of Chicago in 1943 and attended the Illinois Institute of Technology from 1947 to 1949. He set up his own studio in Chicago in 1952.

Skrebneski is most known for his fashion photography and his work for the ad campaigns of the cosmetics company Estee Lauder, Inc. He has photographed various celebrities, including Cindy Crawford (whose first notable photos he took), Oprah Winfrey, Audrey Hepburn, Diana Ross, Hubert de Givenchy, Diahann Carroll and François Truffaut He has created numerous other ad campaigns.