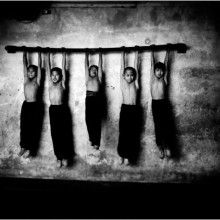 Tomasz Gudzowaty (born in 1971) is a Polish photographer best known for his large format photographs. Gudzowaty studied law at the University of Warsaw. He began his photographic career with nature photography, later turning to social documentary. For the past few years he has focused on sports photography and is particularly interested in non-commercial sports - those that are exotic, atypical or outside the media mainstream. His photos have been published in Max magazine, L'Equipe, The Guardian, Newsweek, Time and Photo. Gudzowaty is a multiple winner of the profession's premier contests, including eight previous World Press Photo awards, as well as Pictures of the Year and NPPA Best of Photojournalism awards. He has exhibited worldwide and published several photo books. He is associated with Yours Gallery in Warsaw, where he lives, with Focus Photo und Presseagentur in Hamburg and the Stephen Bulger Gallery in Toronto.