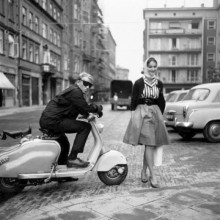 Tadeusz Rolke (born 1929 in Warsaw) is a Polish photographer whose work spans sixty years of Polish history. His early photographs show the ruined, and then rebuilt Warsaw in the new postwar, communist reality. Rolke has been a photojournalist, a fashion photographer, publishing in Polish magazines such as Stolica, Ty i Ja, or Przekrój, and German ones such as Stern, Art, or Der Spiegel. What matters to him in photography is the moment, the spontaneity of the gaze, and the documentation of reality, in which he has remained close to the notion of photography as exemplified by Henri Cartier-Bresson. Since the 1990s Rolke has been working on a series portraying Hasidic centres in Poland and Ukraine, published as (We were here. The last traces of a lost culture). In 2012, Piotr Stasik made a documentary film about Tadeusz Rolke (Travelogue).