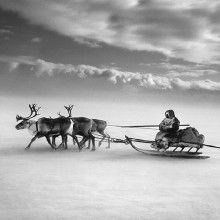 Sebastiao Salgado (born February 8, 1944) is a Brazilian social documentary photographer and photojournalist. Educated as an economist, Salgado egan his photography career in 1973. His first book, Other Americas, about the poor in Latin America, was published in 1986. This was followed by Sahel: Man in Distress (also published in 1986), the result of a 15 month long collaboration with Medecins San Frontières covering the drought in northern Africa. From 1986 to 1992 he documented manual labour world-wide, resulting in a book and exhibition called Workers, a monumental undertaking that confirmed his reputation as a photo documentarian of the first order. From 1993 to 1999, he turned his attention to the global phenomenon of mass displacement of people, resulting in the internationally acclaimed books Migrations and The Children published in 2000. Working entirely in a black-and-white format, Salgado's respect for his subjects and his determination to draw out the larger meaning of what is happening to them, has created an imagery that testifies to the fundamental dignity of all humanity while simultaneously protesting its violation by war, poverty and other injustices.