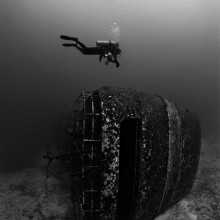 Pongsatorn Sukhum is an Underwater Fine Art Photographer and Shipwreck Researcher, based in Bangkok Thailand.

He has been diving since the late Seventies and spends most of his free time researching and hunting for shipwrecks and sunken aircraft in his native Thailand. He has amassed a large collection of books, documents, and maps - all related to vessels that may be sunk in the area.

His black and white underwater photographs have received numerous accolades including honourable mentions across multiple categories at the 2008 Prix de la Photographie Paris (Px3), the 2008 International Photography Awards (IPA), and the 2010 Black and White Spider Awards.

He was inducted into Wyland's Ocean Artists Society in 2011.