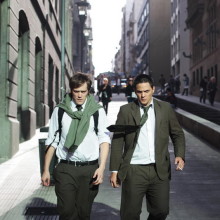 Born in 1984 in Moscow. Studied philology in Moscow State Pedagogical University. During the studies I started working as a photographer, gradually led to my favorite genre, the sports photography. In 2006 - 2010 I worked as a sports photographer in the various media of Moscow (“Izvestia”, “Novaya Gazeta”, TASS, “Sport day by day”). In 2007 graduated from the annual photojournalism course at Moscow State University. The result of this work in sports photography were different awards in Russian contests of photojournalism. In 2010 my husband and I moved to Buenos Aires, than to Sao Paulo, Bazil. In Latin America, I became a freelance artist and interested in the genre of street photography. Having the opportunity to travel around the continent, for two years now, I don´t stop to shoot in search of my own style of street photography. In 2012 I was short-listed in the London Festival of photography and became a finalist of the Moscow Festival of street photography.
I'm also member of young russian collective Momentum http://momentumstreet.com/.