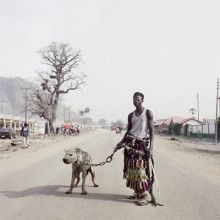 Pieter Hugo was born in 1976 in Johannesburg and grew up in Cape Town, where he continues to live. Hugo is self-taught, having picked up a camera aged 10. He remembers the first image he printed, which was a homeless person in Johannes. Early on in his career he noticed that, "he often found himself being critically scrutinized by the subject he was photographing. It was then that he decided to switch to a larger and more cumbersome format of photography, one that would require negotiating consent and dialogue with the person being photographed - a more sedate and contemplative approach. His most recognized work is the series called 'The Hyena & Other Men' and which was published as a monograph.