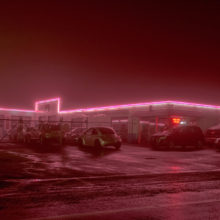 Peter Ydeen is primarily an Urban Landscape photographer currently living in Easton Pennsylvania, working in New York City and often traveling abroad. He works within the now established tenet of Urban Landscape Photography which celebrates the complexity and beauty of the mundane world. As the work progresses it has been taking on a more romantic quality, which uses the typical and ordinary as an impetus, but then adapting more ethereal qualities. His work looks for inspiration in the poetics of George Tice, the playful lyricism of Paul Klee, the eccentric energy or Charles Burchfield, all trying to set themselves within the romantic setting of an E.T.A. Hoffman tale.

After studies, Peter made his way in a variety of jobs, including set construction, lighting, illustrations, architectural modeling working in architecture, stage, advertising and film. Later, after marrying his wife Mei li, they opened a gallery in New York City selling African, Chinese and Tibetan sculpture.

Over the last several years Peter has concentrated on photography where he is able to use the many years spent learning to see.

I Want to BE a Bike

Why am I Round

A Big House with a Broken Awning

A-Treat and a Bus Stop

ICE and a plum tomato

Its a Nice Night for a Picnic

I want a Yellow House and a White Picket Fence

The House on the Hill

Its a Green World Out There