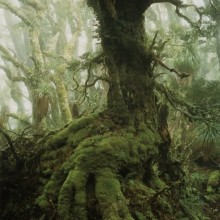 Peter Dombrovskis (1945 – 1996) was an Australian photographer. Dombrovskis was born in Wiesbaden, Germany in 1945 of Latvian parents. He emigrated to Australia in 1950 with his mother Adele and started taking photographs in the 1960's. He was strongly influenced by Lithuanian-Australian pioneer, conservationist and photographer Olegas Truchanas, who became a father figure to him. He was equally influenced by landscape photographers of mid-century America such as Ansel Adams, Edward and Brett Weston and Eliot Porter.