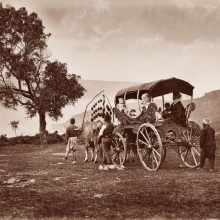 Pascal Sébah (1823–1886) was an pioneer photographer who worked in Istanbul.

In 1857, at the age of 34, he opened a photographic studio at 10 Tom Tom Sokaği, the street where the Austrian Post Office was situated and which was the continuation of the Rue de Postes. He called his studio 'El Chark Societé Photographic'. The main street of Péra being highly commercial, he opened a new studio as soon as possible at 232 Grand Rue de Péra. In 1860 he moved up the road to 439, next to the Russian Embassy, and employed a Frenchman named A. Laroche to run the studio. Meanwhile the original studio on Tom Tom Sokaği remained open, and in later years was used as a sophisticated laboratory. Early on Sébah's skills as a photographer earned him a reputation in Istanbul, and in 1859 the Societé Française de Photographie in Paris awarded him a medal for his work.