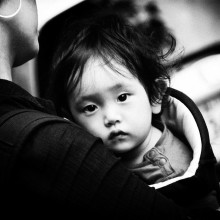 “EVERYTHING IS IN FLUX AND NOTHING IS PERMANENT. NO ONE CAN STOP THE FLOW OF TIME. SO, THE ACT OF ME TAKING PICTURES IN AN INSTANT IS A MODEST RESISTANCE OF JUST THAT.” (by OSAMU JINGUJI)

Osamu Jinguji was born in Tokyo, Japan in 1962. Now, he is a photo artist and a creator but his first career as an artist is an actor and a model. After their activities for 5 years, he has retired owing to bad health. Additionally, after taking over 25 years of twists and turns, he had made a decision to live as an artist again and finally selected to become a photographer which he liked the best of ever and fit his current life style very much.

His current career by them has re-started since his first poetry-photo book has been published in 2009. After that, he has been ever participating in a lot of group exhibitions, art fairs in New York (ex; SCOPE), in Miami (ex; SPECTRUM), in Spain (ex; ARTEANDO) and in Germany (ex; BERLINERLISTE), etc. Also, his works, which were specialized in black and white on/off the street, for the last several years and at many countries, have been featured on a variety of Art Web Magazines including 'The Arte Fotografica' (Portugal) and so on. In February of 2014, they have finally appeared in the PhotoVogue Collection (A collaboration w/ VOGUE Italia) at Art+Commerce in New York.

”His use of black and white allows him to explore echoes of past selves, the world of the unconscious and his own aesthetics and philosophy.”
(By "Aesthetica Magazine")