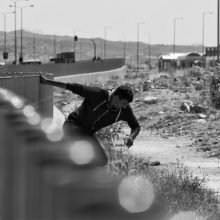 I was born in Lisbon, in 1976.
I’ve training in photojournalism with CENJOR (Porto), photography in IPF (Porto) and an internship at Global Imagens Agency (Porto).
Currently I live and work as a freelance photographer in Porto.

The Island of Catalonia. Partially hidden by the crowd, Carles Puigdemont, at the time president of the Catalan Government, is seen speaking in the Parliament throuhght a giant screen installed at Plz Lluís Companys. Just a few minutes later he'll make a first declaration of independence of Catalonia, which he will immediately suspend with the purpose of opening a negotiation period with the Government of Madrid.

The Island of Catalonia. Inés Arrimadas, leader of Ciudadanos Cataluña and of the parliamentary opposition, speaks to the press outside the building of the Municipal Council of Les Corts, just after voting for the catalan parliamentary elections of 21st of December.

The Island of Catalonia. All Saints' Day. A woman, accompanied by her family, leaves flowers in the grave of a family member shot by the Franco regime, at Fossar de la Pedrera, Montjuic.

The Island of Catalonia. An anti-fascist protester participates in a pro-independence rally.

The Island of Catalonia. A woman cries of emotion during a rally held at Plaza Catalunya in Barcelona, as part of the celebrations of Hispanic Heritage Day.

The Island of Catalonia. In the vicinity of the benedictine Monastery of Montserrat, members of the Confraternity of the Bearers of the Holy Christ, carry the cross of Christ in procession. Montserrat is a mountain located in the outskirts of Barcelona, containing an extremely strong symbolic strength in Catalan history. The Monastery is the keeper of the famous image of Our Lady of Monte Serreado, the saint patron of Catalonia.

The Island of Catalonia. Members of Ciudadanos Cataluña celebrate the outcomes of the 21th of December elections.

Jumpers. A man is seen jumping the fence of the port of Patras, Greece.

Jumpers. A child stands in the shoulders of his father, while waiting in line for registration in Transit Camp of Slovanski Brod, Croatia.

Jumpers. Helicopter of the hungarian army is seen on maneuvers in the Serbian-Hungarian border.

Jumpers. In a temporary shelter of Caritas Hellas, in Athens, Yazidi community members running from the ethnic persecution of Islamic State in Irak, wait for relocation in a definitive asylum country, such as Germany.

Jumpers. A refugee waiting for relocation takes a picture of the Greek flag, near the Port of Pireus, in Athens.

Jumpers. A group of youngsters wash themeselves in a makeshift migrant's camp, close to the port of Patras.

The Kites Of Basmane. Kite tale stuck in a tree. Izmir, Turkey.

The Kites of Basmane. Boys watch the kites. Izmir, Turkey.

The Kites of Basmane. Boys play with kites. Izmir, Turkey.

The Kites of Basmane. Boy launches the kite. Izmir, Turkey.

The Kites of Basmane. Children hold the tale of their lost kite. Izmir, Turkey.