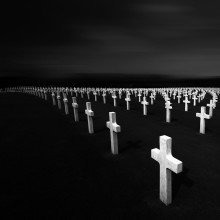 Michael De Guzman is a Filipino born Fine Art Photographer who is known for his black and white landscapes. He is also known as MDG among his photography friends.

MDG strives to create images as food for the soul. He sees himself like a chef collecting raw materials when shooting in the field and prepares them on post processing ready to be consumed by anyone who wants landscapes beyond black and white.

MDG discovered his love for taking pictures on June of 2011 when he joined a workshop for Landscape Photography. He started shooting color and near infrared but he always had a different feeling for black and white. On August of 2012, he took another workshop specializing in Fine Art Black and White Landscape and he was taken into the process.

MDG is a black and white landscape specialist using tools such as digital cameras and Photoshop with other software for post processing. He also uses Piezography for his prints. His images have been in numerous local and international publications both online and print. He also won awards including PX3 Prix De La Photographie Paris and IPA Lucie Award.

MDG is now a regular contributor of a local photography magazine for the landscape section. He also assists and conducts workshops for Landscape and Fine Art Photography.

Waltz with the Wind

A Lady in Singapore