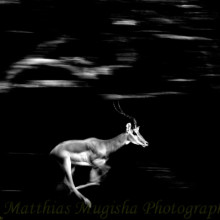 Born in 1969, Matthias Mugisha is a Ugandan photojournalist who got his first camera at the age of six. Over the years, he has moved through all of Uganda's National Parks, climbed all the major mountains in the country and walked through forests photographing the country's biodiversity.
He was recognised for his exemplary photojournalism by the Foreign Correspondents Association of Uganda and the Friedrich Ebert Stiftung when he won the overall award for news single and took both the 2nd and 3rd positions for environment single under the Uganda Press Photo Award 2012.
In 2013, he was the winner of the 1st and second best Uganda Photo Press Awards 2013 in the Nature Category. He is currently working of a Coffee Table Book about birds. Uganda has about 50% of the African population of birds and about 11% of the global bird species.
Matthias Mugisha was the main photographer for Uganda Wild Life Authority (UWA) website photographic content launched in May 2012.
Training in photography:
-Asian Academy of Film and Television ( AAFT) Noida India
-Institute For the Advancement of Journalism - Johannesburg South Africa.
Other Courses
-AFP Foundation: Certificate in reporting for the web.
-International Institute of Journalism Berlin: Certificate in Digital Photography

Matthias specialises in Nature, Travel, Adventure, and development projects. He is a founder and Director of PearlEyes, an imaging company that promotes Uganda through images and is also Honorary Member of the International Institute of Journalism Berlin, Germany

One candle, one exposure