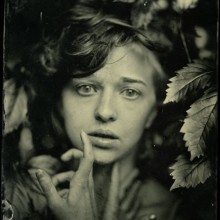 Mark Sink, photographer, curator and teacher, has been and making a living from fine art photography since 1978. He is well known for his imagery made with the toy plastic camera the Diana. Currently, also a reverse technology, he is producing collodion wet plate photographs. His personal work is in numerous museum collections as well as gallery solo and group shows in the US, South America and Europe. He is currently represented by G. Ray Hawkins in CA. Robin Rice in NY, Paul Cava in Philadelphia, Rule Gallery in Denver. As a photographer of fine art he worked with and documented noted artists lives and their work such as Andy Warhol and Jean Michel Basquiat and Rene Ricard.

His curatorial photography projects are numerous. Critical acclaim with the Museum Of Contemporary Art/Denver photography exhibitions should be noted where Mark was a co-founder and director from 1999-2000. Mark currently is a private art consultant in Denver, independently curating showing a wide range of emerging artist’s with internationally known names.
Mark’s family heritage in photography runs deep. Sink's on-going research is on his great grand father photographer James L. Breese, who was the founder, member and primary inspiration for the Camera Club of NY one of the earliest grouping of fine art photographers in America. And further back Samuel Finley Breese Morse, (Breese’s uncle), was "the father of American photography" and inventor of the telegraph. With this legacy in mind Sink, has formed a monthly Salon of artists both on the Internet and in his living room.