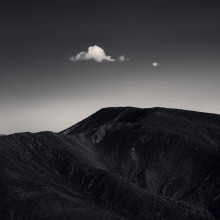 Mark Singles is a visual storyteller. He has spent the past 40 years working
in the film and television industry.
He has a bachelor’s degree in Film and Television Production
from Montana State University located in Bozeman, MT.

Mark has an extensive range of experience.
He worked for many years as an award winning commercial director.
As a producer, he created broadcast content for ESPN and the Family Channel Network.
Going back to his Alma Mater, he taught junior and senior level production courses.
He has traveled extensively, filming across the world for broadcast television.
Most recently, he has worked as a graphics and special effects designer
creating large screen imagery for clients including
the Oakland A's, VISA USA, Dell and Nintendo.

After many years of working within the confines of buildings and studios,
Mark returned to the open spaces exploring the light and fog of Northern California and the desert quiet of southern Nevada.
Traveling up trails, mountains and beaches for years, he has quietly pursued a path of
visual poetry and his work is a testament to what he has discovered and desires to share.

His portfolio, “In Silence Standing”, was featured on the front cover and in issue #94 of LensWork magazine. A 10 print folio of this work is also available through LensWork.