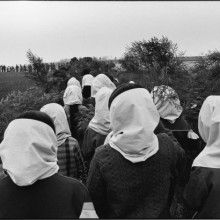 Lu Nan (born in 1962, Beijing), is a Chinese photographer. Lu Nan is a modest man. Though he’s a former member of the elite Magnum Photos, he shuns interviewers and avoids being photographed. His passion is for photographing others, always outsiders—people who are rejected by society or pushed to its margins. To make his epic photo documentary on China’s underground Catholics (On the Road, 1992-1998), he—like his subjects—risked arrest and prosecution. He has also photographed Tibetan peasants and inmates of mental hospitals. On a 2006 visit to Myanmar (Burma), Lu Nan encountered another group of outcasts, people addicted to their country’s most lucrative exports: opium and heroin. After photographing men, women and children blissed out in narcotic dazes, he moved on to one of the prison camps where addicts and dealers alike suffer under the same harsh conditions. Asked how he manages to win the trust of his subjects, Lu Nan replies: “I just respect them and care about them. … They are the same as us.”