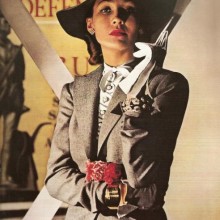 Louise Emma Augusta Dahl (1895 - 1989) was an American photographer. She is known primarily for her work for Harper's Bazaar, in association with fashion editor Diana Vreeland.

Louise Dahl-Wolfe grew up in San Francisco and attended the San Francisco Institute of Art, initially hoping to become a painter. After graduation, she found employment designing electric signs and interiors. In 1923, she moved to New York City to study architecture and design. A year later, she returned to San Francisco to work in an interior decorating firm. Dahl-Wolfe’s first professional photography job was to shoot rooms designed by interior decorators. In 1933 she moved with her husband back to New York, where she found work photographing food for Woman’s Home Companion magazine. She also shot photographs for clothing stores—in exchange, the stores allowed her to use the models and clothes for her own personal shoots. This work landed Dahl-Wolfe with extended assignments for Saks Fifth Avenue, Bonwit Teller, and Crown Rayon, and an offer of a permanent contract with Vanity Fair, which she rejected out of concern for her independence as a fine art photographer. During the 1940s, she also declined an offer from J. Walter Thompson to produce color photographs for advertisements.