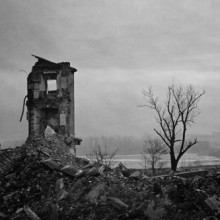 Sempolinski was one of the founders of the Union of Polish Artist Photographers and a long-time chairman of the organization, played a very important role in the Polish photographic community after World War II. Although known, he has been somewhat forgotten; little is known about his complete photographic oeuvre and many years have passed since audiences last had an opportunity to see his works. Sempolinski enthusiastically documented Warsaw's reconstruction, laborers at work, the participation of artists in this project and reconstructed or newly built quarters of the city. In the 1950s, he took an interest in the impoverished corners of Warsaw, but produced the greatest number of photographs of these places in the 1970s. These now constitute an unusual record of neighborhoods that no longer exist. Sempolinski photographed the city street by street, building by building, following no pre-devised plan. His method brings to mind the work of famous French photographer Eugene Atget, who is referenced in the exhibition's title. Atget had a habit of saying, "I merely produce documents." The vast majority of Sempolinski's photographs are also "merely" documents, though they simultaneously function as highly capacious signs that can today be filled with meanings related to the history of places, the history of photography, its role in the reconstruction of memory, as well as its aesthetic, social and political impact.