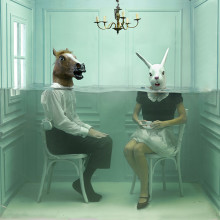 Lebanese Fine Arts Photographer. Award recipient of the Shabab Ayyam Photography Competition in 2011. Born in Lebanon in 1987, Lara Zankoul graduated from the American University of Beirut with a Masters in Economics. Zankoul was born photographically in 2008. Driven by passion, she taught herself photography and started an enriching journey in the artistic field.. She has participated in several local and international exhibitions such as the ‘Women’s Art Exhibition’ in Art Lounge Lebanon in 2011 and the 3rd edition of the Festival Photomed in the South of France in 2013. In her solo show in Ayyam Gallery in January 2013, she presented for the first time, her cinematographic work, which was auctioned in April 2013 at Christie’s.

I woke up in a dream

The burden of a secret

Burden of your silence