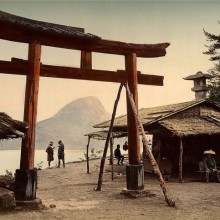 Kusakabe Kimbei worked with Felice Beato and Baron Raimund von Stillfried as a photographic colourist and assistant before opening his own workshop in Yokohama in 1881 in the Bentendori quarter, and from 1889 operating in the Honmachi quarter. He also opened a branch in the Ginza quarter of Tokyo. As the protégé of von Stillfried, Kusakabe Kimbei continued the tradition of the psychological studio portrait and recorded scenic views of the country while he developed his own Japanese sense of photography. Like postcards today, his work was collected by tourists and exported for sale as curiosities to those who could not visit Japan. He stopped working as a photographer in 1912-1913.