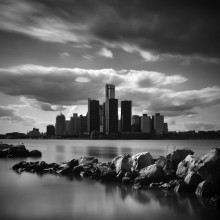 Jon DeBoer is a photographer and graphic designer living and working in Metro Detroit, Michigan. Jon became interested in photography after taking two photography courses at Lawrence Technological University, where he received a Bachelor of Fine Arts in Graphic Design in 2010. His background in graphic design and interest in architecture has strongly influenced his approach to photography. Jon began exploring the city of Detroit with a camera in 2009 and has been photographing the evolving urban landscape ever since.

Jon’s work has been featured in various news sources and magazines including: Novum: World of Graphic Design, Metro Times Detroit, Detroit News, Detroit Free Press, and Crain's Detroit Business. He debuted his first solo exhibition in June 2015 at Two James Spirits in Detroit. The exhibit was organized and curated by Miami-based Latelier Ldep Gallery. Jon currently has nine of his night photographs featured in the “Detroit: After Dark” exhibit at the Detroit Institute of Arts. The exhibit runs until April 23. 2017.