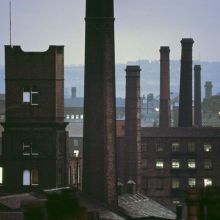 John Bulmer (born 1938) is a photographer, notable for his early use of colour in photojournalism, and a filmmaker.

He was brought up in Herefordshire, became a passionate photographer, and when he went to study engineering at Cambridge continued taking photographs- first for the University newspaper Varsity and then for Image, a picture magazine that he co-founded. He also started shooting stories on Cambridge for Queen Magazine, the Daily Express newspaper, and finally a story on the Night Climbers of Cambridge which sold to Life Magazine.

This ended his career at Cambridge, and he went up to London where he was offered a job as photographer on the Daily Express. At the time the Express was the foremost paper in Britain for photography, and did many assignments in association with Paris Match.

He soon started shooting stories for Town Magazine, a new fashion magazine that became well known for good photography, using others such as Terrence Donovan, David Bailey and Don McCullin. John Bulmer did many groundbreaking stories for them including; The Black Country, Nelson, The North, as well as overseas stories in South America, Africa, New Guinea and Indonesia.

The Sunday Times then produced the first of the Colour Supplements, later copied by all the newspapers. John Bulmer shared the cover of the first issue with David Bailey- a picture of a footballer he took surrounded by pictures of Jean Shrimpton’s armpit! This was a small start but John soon had a contract to shoot sixty pages a year, and travelled to nearly 100 countries on their behalf.