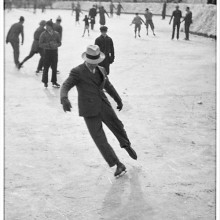 John Albok (1894–1982) was a Hungarian photographer who immigrated to the United States and documented street scenes in New York City during the Great Depression and later.

For sixty years, using a 5 x 7 view camera and then a twin lens reflex camera, Albok took as his subject people and passersby outside his shop, and New York City life during the Depression, and World War II. Central Park, children, street scenes, and people at leisure were also among his preferred subjects. He also documented political upheaval and labor and left activism in New York throughout these same decades, including many photographs of May Day and Labor Day parades, antiwar demonstrations, and anti-Vietnam War rallies.

These pictures form the critical mass of his photographic work and have been compared to photographs commissioned by the Farm Security Administration. Of his Depression photographs, Albok remarked: "I photographed many poor souls, trying my best to leave them their most precious heritage-their dignity. There was nothing else left." Albok was also well-known as a photographer in the New York's Hungarian community. He documented many of that community's events, from weddings to picnics and political rallies, and specialized in portraiture. He printed and developed his photographs in his tailor shop.