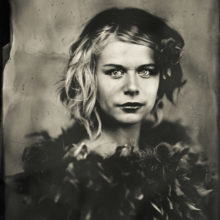 Joanna Borowiec,a graduate of the European Academy of Photography in Warsaw, diploma thesis in the Creative and Expressive Photography Workshop.
Member of the Association of Polish Art Photographers (ZPAF). Enthusiast of medium- and large-format analogue photography. Uses historic photographic processes like ambrotype - wet collodion technique, cyanotype.
The main topic of her photos is humanistic photography, human. She has participated in individual and collective exhibitions at home and abroad, i.a. in Poland, Germany, Spain, Singapore, Canada, USA. MIFA Moscow Interational Foto Awards, 3rd Place Nature-Flowers 2016, Finalist Skin, Visible White Photo Prize 2016, Italy"Double", AFF Art Fresh Festival,Warsaw, Poland-2016, Finalist- 4th Biennial of Fine Art & Documentary Photography, Berllin.-2016.
Her works made with wet collodion technique were appreciated on the Singapore International Photography Festival, the 'Glass Faces' project was presented in the National Museum of Singapore Stamford Gallery (2014), her pinhole photographs were presented on the International Pinhole Festival in Germany, the 'No Time' series was shown in the Iserlohn Museum (2010). Winner of the Black & White Awards USA photography competition - first place in category People (2013). Prize-winner of the Silver Medal Awards 2014 San Francisco International for work named 'Double' (2014). Second and third place winner in the prestigious International Photography Awards (2011) competition for 'Friends' work and 'Insomnia' series. Her photographs were awarded the second place in the Historic Garden competition and presented in the Museum of King Jan III's Palace at Wilanów (2012). Prize-winner of the 'Child' International Artistic Photography Biennale in 2012. She was also awarded the third place in Photographer of the Year category of the Black& White Spider Awards (2013) competition. Prize-winner of the Portfolio 2015 Black + White Photography UK, the Portfolio 2013 Black & White for Collectors Of Fine Photography Canada, the Portfolio 2012 Shot Magazine USA. Her works and interviews with her were published in many magazines, i.a. the Black+ White Photography UK (the cover), the Shot Magazine USA, the Black and White Magazine Canada and in national magazines(...)