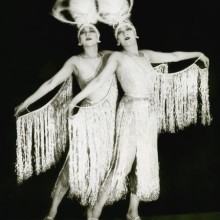 Abbe had a remarkable talent for inspiring trust in stars and Lillian Gish convinced him to come to Italy in 1923 to work as a lighting consultant and still photographer for "The White Sister." He closed his Broadway studio, abandoned his wife and children, and moved to Italy. He spent the next period of his life in Europe, photographing movie and stage productions in Paris and London and working as a photojournalist. Several landmark photographs of Joseph Stalin in a trip into the Soviet Union during the late 1930s would make him a celebrity of news photography during the late 1930s. His book, I Photograph Russia, was one of the important volumes of early photojournalism. He signed his vintage prints with his last name in red crayon on the lower left corner of his images. He used a credit stamp for publicity images. Despite the relatively short duration of his career on Broadway, he was one of the greatest portraitists of the great age of theatrical portrait photography.