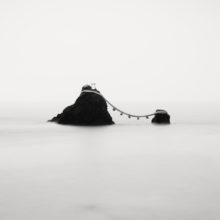 The Great East Japan earthquake of 2011 had a great impact on me, leading me to create this body of work. The Fukushima nuclear tragedy shook our society, our materialistic lifestyles and values. It led me to think about the dignity of all living things, something I had forgotten for quite a long time.

My photographs encourage the viewer to reconsider the relationship between humans and nature. Seeing people helping each other physically and emotionally after the disaster, it made me reconsider the act of prayer. I realized that this act of praying, a part of Japanese society since ancient times, is the foundation of this society.

Reflecting on the traditional Japanese idea that every natural entity possesses a spiritual essence, and the prayer for those things, I started photographing torii and shimenawa, the shrine gates and the twisted ropes used for ritual purification in the Shinto religion, both of which divide sacred places from the real world. The natural landscape — mountains, rivers, grasses, and trees — became my subject.

In modern society, endless information scrolls across our devices, keeping our brains constantly occupied. By focusing on nature, I am looking to traditional ways, and reconsidering traditional Japanese values, which teaches that the invisible energy of nature and human activities are closely integrated.