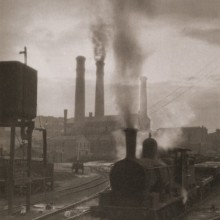 Harold Cazneaux (1878 - 1953) was an Australian pictorialist photographer; a pioneer whose style had an indelible impact on the development of Australian photographic history.

Cazneaux moved to Sydney in 1904 and worked in Freeman & Co. Ltd's studio, becoming manager and chief operator. On 1 September 1905 at Lewisham he married Mabel Winifred Hodge. In his leisure time he began to document old Sydney. In 1907 he showed photographs at the members' exhibition of the Photographic Society of New South Wales and two years later held the first one-man exhibition in Australia: the critics praised the diversity of his work. He sent some of his pictures overseas and was recognized as a pioneer of the pictorial movement. In 1916 with five friends, he founded the amateur Sydney Camera Circle. Opposed to slavish imitation of overseas trends, he argued for a break with the typical low-toned British print in favour of 'truly Australian sunshine effects'.

In 1914 Cazneaux won Kodak's 'Happy Moments' contest and used the £100 as a deposit for a house in Roseville where he lived and from 1920 worked for the rest of his life. Frustrated and in poor health, he had left Freeman's in 1918 and was rescued from penury by S. Ure Smith, who gave him regular work for his new publications the Home and Art in Australia. His frontispiece photograph for the first issue of the Home in 1920 used sunshine effects so successfully that it sparked a new trend in local photograpy. 'Caz' benefited greatly from the publicity. A member of the London Salon of Photography, he exhibited there from at least 1911 and in 1924, with other members of the camera circle, opened the short-lived Australian Salon with a hanging of 170 pictures.

Cazneaux's stature is based on the extraordinary diversity of his work—landscapes and portraits. He produced a series of portraits of well-known artists, musicians, and actors and many books including Canberra, Australia's Federal Capital (1928), Sydney Surfing (1929), The Bridge Book (1930), The Sydney Book (1931), Frensham Book (1934), and the jubilee number of the B.H.P. Review (1935). As a critic he wrote for the Australasian Photographic Review and the Gallery Gazette, London, and columns for the Lone Hand and Sydney Mail. Sometime president of the Photographic Society of New South Wales, he was elected an honorary fellow of the Royal Photographic Society of Great Britain in 1937.