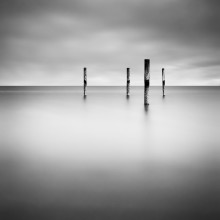 Grant Murray was born in Cape Town, South Africa, and moved to the United Kingdom to further his IT career in 2001. He developed an interest in photography after buying his first digital SLR camera in 2004. Trips to his native South Africa, the north Norfolk coast in England and the discovery of a new love, Canada, helped Grant develop his passion for recording the beauty of nature which often found expression in vivid seascapes taken at sunrise and sunset. In 2010 Grant settled in Vancouver, Canada, where he started his business, Grant Murray Photography, and where he continues to follow his art. In his latest work he reveals the Vancouver coastline as a place of still waters and restless skies. He hints at the latent drama in tranquil spaces and rejoices in the beauty of the west coast light.