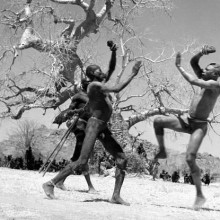 George Rodger (19 March 1908 – 24 July 1995) was a British photojournalist noted for his work in Africa and for taking photographs of the death camps at Bergen-Belsen at the end of the Second World War.

His pictures of the London blitz brought him to the attention of Life magazine, and he became a war correspondent. He won eighteen campaign medals covering Free French activities in West Africa, and went on to document the war front in Eritrea, Abyssinia and the Western Desert. He travelled to Iran, Burma, North Africa, Sicily and Salerno, Italy, where he met and befriended Robert Capa.

Having covered the liberation of France, Belgium and Holland, Rodger was the first photographer to enter Bergen-Belsen concentration camp in April 1945. In May he photographed the German surrender at Lüneburg for Time and Life. Traumatized by the experience of looking for 'nice compositions' in front of the dead, Rodger embarked on a 28,000-mile journey all over Africa and the Middle East, focusing on animal life, rituals, and ways of life that exist in a close relationship with nature.

In 1947 Rodger was invited to join Robert Capa, Henri Cartier-Bresson, David Seymour and William Vandivert in founding Magnum. His next major trip was a Cape-to-Cairo trans-Africa journey, during which he made extraordinary pictures of the Kordofan Nuba tribe which first appeared in National Geographic in 1951. Africa remained a preoccupation for him for over thirty years.