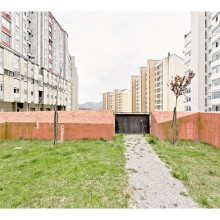 Franco Sortini was born in 1958. He has worked on graphics and painting, and later dedicated to photography. In the early '80s, not happy with the photograph in black and white, who could not fully express his creativity, under the leadership of Franco Fontana switches to color photography.
Since 1982 he has produced numerous photographic works. The research on the figure and the movement led to the first major work "Fragments of Memory" of which Denis Curti writes: "... there are no formulas borrowed. One great energy that pushes forward the impulse who, without apparent interest, then remain on paper for a time ever hoped. With this work Franco saved the emotions of slight things, removing the weight of things around. " "Fragments of Memory" was presented in 1990 in Arles, and exhibited in numerous galleries and events. In 1995, with the work of the friends Fulvio de Pellegrin and Adriano Eccel, "Fragments of Memory" is exhibited in Spain in the itinerant exhibition "Molteplice", receiving a broad consensus. The famous Spanish magazine "La Fotografia Actual" devotes an editorial. Some images are selected by Jean Claude Lemagny for the collection of the National Library in Paris. In the years to follow changes its vision by focusing primarily on the urban landscape. His research focuses primarily on the empty city, chasing the renaissance concept of the "ideal city", a place where to find order in the chaos. "The work of Franco Sortini born in space and is also written with large format it needs to solve the structure perspective, the visual system of which every picture has, in fact on which it is born. Classical structure, in which prevails a central perspective which outlines the profile of a factory building, but more broadly of an architecture. His work is in fact on this very strongly urban genre where the rigor and constructive order is resolved with a desaturated color.
Color which then reappears with connotations, almost citations, justifying a poetic typical of the author. " (Luigi Erba).
Simultaneously with the creative photography develops the commercial photography, and in 1986 he opened a studio of industrial photography, working with advertising agencies and communication, and offering its services to corporate customers.
His photographs have been shown in many exhibitions, and published by important magazines, and are in important private and public collections, including those of the Bibliotheque Nationale de Paris, the AFOCO Archives of Cordoba, the Galleria Civica of Modena , the Department of History of Contemporary Art at the University of Siena, the Museum of the Landing of Salerno.
Professional photographer since 1986, since 1990 is an effective member of the italian National Association of Professional Photographers.
He currently lives and works in Salerno.