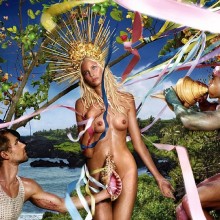 David LaChapelle is known internationally for his exceptional talent in combining a unique hyper-realistic aesthetic with profound social messages.

LaChapelle’s photography career began in the 1980’s when he began showing his artwork in New York City galleries. His work caught the eye of Andy Warhol, who offered him his first job as a photographer at Interview Magazine. His photographs of celebrities in Interview garnered positive attention, and before long he was shooting for a variety of top editorial publications and creating some of the most memorable advertising campaigns of his generation.

LaChapelle’s striking images have graced the covers and pages of Italian Vogue, French Vogue, Vanity Fair, GQ, Rolling Stone and i-D, and he has photographed some of the most recognizable faces on the planet, including Tupac Shakur, Madonna, Eminem, Andy Warhol, Philip Johnson, Lance Armstrong, Pamela Anderson, Lil’ Kim, Uma Thurman, Elizabeth Taylor, David Beckham, Jeff Koons, Leonardo DiCaprio, Hillary Clinton, Muhammad Ali, Britney Spears, Amanda Lepore, Katy Perry and Lady Gaga, to name a few. After establishing himself as a fixture in contemporary photography, LaChapelle decided to branch out and direct music videos, live theatrical events, and documentary films. His directing credits include music videos for artists such as Christina Aguilera, Moby, Jennifer Lopez, Amy Winehouse, Britney Spears, and No Doubt. His stage work includes Elton John’s The Red Piano and the Caesar’s Palace spectacular he designed and directed in 2004. His burgeoning interest in film led him to make the short documentary Krumped, an award-winner at Sundance from which he developed RIZE, the feature film acquired for worldwide distribution by Lion’s Gate Films. The film was released theatrically in the US and in 17 different countries in the summer of 2005 to huge critical acclaim, and was chosen to open the 2005 Tribeca Film Festival in New York City.