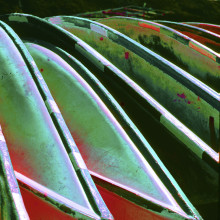 My first professional assignment, about sixty years ago, was for a theatrical magazine,; of picture stories with text, of leading young actors .At the same time I built up a collection of images to form a personal picture library. I sought a way to sell these images and became interested in making very large pictures for interior decoration and sold pictures for hanging in reception areas, window displays, offices, home décor and the like. I eventually formed the company Photomurals Ltd., for making giant enlargements from my own images and those supplied.
Photomurals were made, in many photographic materials available and supplied to such clients as the, Science Museum, , Harrods, Brook Bonds ,Aeroflot ,BBC,ITV,and many hotels, restaurants ,universities ,banks ,pubs ,private houses and so on. I designed and constructed photo exhibitions to promote many causes. One was held at St Martins in the Fields church and travelled to Brussels Convention Centre and other places
At the end of 1979 I left for Israel I continued for a little while with photomurals Produced one for décor for the Hebrew University and others for an office block .I travelled the country to photograph in black and white and color., the scenery, archaeological; and religious sites, and anything else that interested me to add to my picture library. These images were for editorial publication and have had much success with this
I have had one sole exhibition at a gallery in the artists’ quarter of Jaffa, , and take part in exhibitions