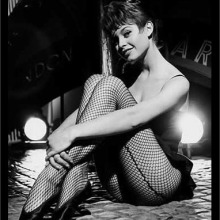 Born in Highbury, north London, Henry Cornel Lucas was one of eight children. His interest in photography was sparked when his mother bought him a Kodak Box Brownie snapshot camera for his 11th birthday. Thereafter, he was always rushing around taking shots of friends and family and developing them in the family bathroom.

Cornel's introduction to the film industry came at 15 through his brother, who secured him a job as a trainee at the same film-processing laboratory he worked at. He also studied part-time at Regent Street Polytechnic (now the University of Westminster). On the outbreak of the Second World War in 1939, Lucas was recruited by the RAF and sent to their photographic school at Farnborough to work on experimental and secret night-photography methods. While there, he had a chance encounter with Cecil Beaton, who advised him against the photographic business, claiming it was "too difficult, too much competition. It's over-crowded." Lucas was undeterred. When they met 10 years later on set at Pinewood Studios, Lucas having ignored his advice, Beaton said, "I knew you would, you silly boy!"

After the war Lucas joined Denham Studios. The Dietrich photographs and further success as a portrait and stills photographer throughout the late 1940s led the Rank Organisation to recruit Lucas to run a specially created studio at Pinewood to photograph the more than 50 stars they had under contract. From his studio, which was set up on an old swimming pool site, Lucas worked on some of the most memorable films of the era.

In 1955, Lucas married one of Rank's most glamorous starlets, Belinda Lee, but the marriage was over by 1959. She was killed two years later in a car crash.

In 1959, building on his success, Lucas turned freelance and opened his own studio in Flood Street, Chelsea, where he continued to specialise in portraiture, while also embracing wider aspects of photography, particularly high-fashion advertising and television commercials.