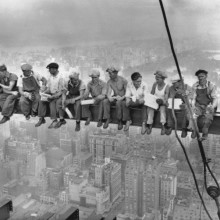 Charles Clyde Ebbets (August 18, 1905 – July 14, 1978) was an American photographer, most famous for his photograph Lunchtime atop a Skyscraper (1932). He is best know for his work in the 1930s when he published his work in the major newspapers across the nation including the New York Times. In 1932, he was the appointed photographic director for the Rockefeller Center which was under construction in New York. In September of that year, he would take the photo which would later define his work, Lunchtime atop a Skyscraper this picture represents eleven workmen lunching on a beam, without any safety. The second, Resting one has Girder watch these same workmen resting, with the top of the vacuum. He took at leaste 10 pictures of this men working.