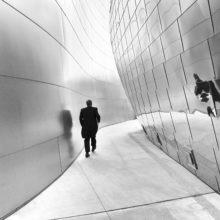 Axel Breutigam is a fine art black & white photographer based in Vancouver, BC, Canada.

"After a long and successful career as an attorney and CPA in his native Hamburg, Germany, Axel Breutigam sold his company and relocated to Vancouver, BC to pursue his lifelong passion of photography.
Breutigam studied under Alan Ross, Ansel Adams’ former assistant, and the exclusive printer of Adams’ Yosemite Special Edition Negatives. Under Ross, Breutigam enhanced his technical skill and was taught how best to use digital processing techniques that emulate the darkroom prints of earlier decades.
Breutigam has established himself as an emerging black and white photographer with a distinct and technically sophisticated style. Intriguing perspectives, bold lighting and abstract geometric shapes are characteristic of his evocative, timeless compositions.
Breutigam’s subtle geometric abstractions, aversion to excessive digital manipulation, and penchant for sharply focused, tonally rich, and high contrast photographs draws parallels to the straight photography style pioneered by members of the West Coast Photographic Movement, which included renowned photographers Edward Weston, Paul Strand, and Ansel Adams. Breutigam’s motifs of abstraction and sharply focused forms make his photographs remarkably contemporary, while the traditional techniques he practices imbue his photographs with a timeless quality that recalls this earlier movement."
October 2016, Kelly Bertrando

In 2014 Breutigam was nominated “Photographer of the Year” in the British Columbia Chapter of the Professional Photographers of Canada (PPOC).

Breutigam self-published two Fine Art Photo Books:
“Solitude in the Desert and Beyond”
A selection of Fine Art black & white images taken in the California Desert, at the North American Pacific Coast, in the Canadian Prairies, in Iceland and in Hamburg, Germany.
“Portland - Living with Bridges”
Fine Art Black & White Images with an editorial touch; emphasizing the beauty of Portland's bridges as well as showing how obtrusive they can be when living and working spaces have been built very close to these bridges.

His latest Fine Art Photo Book
“Exploring Urban Forms”
has been published by Fine Art Impressions, CA in October 2016.
"Breutigam’s journey can be experienced through the unique photographic motifs in this new book. His interplay between the representational and the abstract is intriguing as well as artistic. He invites you to explore the world of urban forms through the eyes of a photographer who speaks the language of black and white photography with his own clear voice and genre."

To see more of Breutigam's work, check out his websites and follow him on Instagram:
www.axelbreutigam.com
www.instagram.com/axelbreutigamphotography