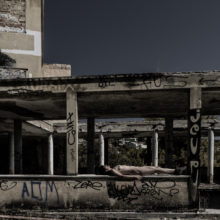 Andreas Theologitis is an architect – urban planner.
He studied in Belgium in the 80's. The first years of his career he spent in Brussels and had the opportunity to take part in projects that marked the urban texture of the city. In the early 90's he returned to Greece where he participated in important architectural and urban projects. He is the coordinator for large commercial and tourist developments, urban regeneration and planning studies in Greece and abroad.
His involvement in photography dates from the age of the darkroom.
His work is marked by intense geometric forms resulting from his background in architecture and which define his style in photography. His extensive travels are reflected in his unique view of the world.
His photographs express in a powerful way the detail of colour, texture, material, leaving the imagination of individual viewers free to create their own particular image. It is a personal need of expression and research beyond rules and which results in another view of reality.
He has made exhibitions of his photography work in various locations and galleries of Athens, Piraeus, Brussels, London, Washington DC, Essex Vermont and New York City. Recently, his collection “Intimate Cities” received awards in several international photography competitions.