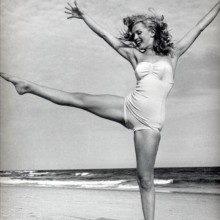 Andre de Dienes (1913 – 1985) was a Romanian American photographer, noted for his work with Marilyn Monroe and his nude photography. Born in Romania, André De Dienes arrived in Paris in 1933, making a living of selling photographs to publishing houses. He worked for The Associated Press until 1936 when the famous Parisian couturier, Edward Molyneux, encouraged De Dienes to become a fashion photographer.
In 1938, De Dienes emigrated to New York where he worked for Esquire, Vogue, Life and Montgomery Ward. In 1944, frustrated with the restrictions of fashion photography, De Dienes moved to Hollywood to pursue his real passion of photographing nudes. De Dienes objective was to see beauty in nature and in an effort to make his photographs as true to life, he never retouched them.
He freelanced for the film studios and photographed many stars including Marlon Brando, Elizabeth Taylor, Henry Fonda, Shirley Temple, Fred Astaire, Ingrid Bergman and Ronald Reagan and rapidly became known as one of the top glamour photographers. Articles documenting his pioneering darkroom techniques in photo montage appeared in U.S. Camera, Figure Quarterly and many more.
De Dienes' association with Marilyn Monroe began in 1945 when he hired her for her first modelling job at age nineteen. A five week road trip photographing the young Norma Jean across California, Nevada and New Mexico led to a love affair and numerous international magazine covers. Their working relationship continued until 1953.