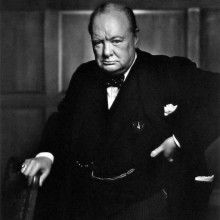 Yousuf Karsh (December 23, 1908 – July 13, 2002) was an Armenian-Canadian photographer, and one of the most famous and accomplished portrait photographers of all time. Karsh was born in Armenia in 1908 and grew up under the horrors of the Armenian massacres. His photographer uncle, George Nakash, brought him to Canada in 1924. After an apprenticeship in Boston with the eminent portrait photographer John H. Garo, Karsh settled in Ottawa in 1932, where he began his professional career. As early as 1936 he was photographing visiting statesmen and dignitaries, among them President Franklin Roosevelt. In December of 1941, his memorable portrait of a glowering, defiant Winston Churchill, which symbolized Britain’s indomitable wartime courage, brought Karsh into international prominence. One of the most widely reproduced portraits in the history of photography, the Churchill portrait was among the first to bear the now-familiar “Karsh of Ottawa” copyright, which has since appeared in publications and on commemorative stamps all over the world. Karsh’s major photographic exhibitions have attracted enthusiastic audiences worldwide, and he is much in demand as an eloquent and engaging speaker. His work is represented in the permanent collections of the Metropolitan Museum of Art and the Museum of Modern Art in New York, the Philadelphia Art Museum, the Art Institute of Chicago, the National Gallery of Canada,- the National Portrait Gallery, London, and other leading museums. He is a recipient of the Canada Council Medal and is a Companion of the Order of Canada (akin to a knighthood). Karsh was awarded the Presidential Citation (U.S.A.) for meritorious service on behalf of the handicapped. He has been Visiting Professor of Fine Arts at Ohio University at Athens and Emerson College in Boston, and has received more than two dozen honorary degrees.