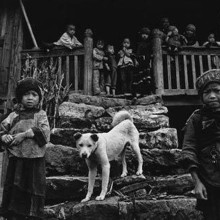 Wu Jialin (Born in 1942, Zhaotong County, Yunnan Province) states in his biography that he was "born to a bankrupt family of literati." The photograhs of this dedicated artist illustrate the varied landscape of such a geographically challenged country. His rich images of life in the Yunnan Province portray the ethnically diverse people living in an environment that has been isolated from outside influence.

His career started by accident in 1968 when an associate asked him to photograph, in his absence, some performances of farmers' art groups in Zhaotong county. As a teacher of painting, he had a strong eye for subject and composition which was reflected in these first photographs. Given that he thought cameras were only for the "idle rich", he continued to use government issued cameras for almost thirty years to document the Yunnan citizens. It was not until the late 1990's that he acquired his very own M6 Leica, awarded by Leica, as well as the distinguished Leica Medal of Excellence.

His influence in photography did not come from the outside world, but from a handful of Chinese photographers, including Wang Zhiping of the April Photo Society. He recalls another strong influence, the Russian movies including War and Peace, White Night, Anna Karenina, that he watched before the Cultural Revolution.

Though his work has been mostly unknown to the West, he has gained prominence through the efforts of many. Most notabe was the International Biennial photography festival in Houston, FotoFest, in 1996 where he had his first exhibition outside Asia. At the same time, Magnum photographer (noted as the father of Chinese photojournalism) Marc Riboud, promoted Wu Jialin's work and wrote an essay for his book, Surprises.

Additional honors include the 1997 Mother Jones Award for Documentary Photography and inclusion in an exhibition in 1997 at the International Center for Photography Museum (ICP) in New York. He was also selected by Henri Cartier-Bresson for the Le Choix d'Henri Cartier-Bresson exhibition and catalogue in 1999, and was featured among ten outstanding contemporary photographers selected by ten international curators in the 2002 Phaidon book, BLINK.