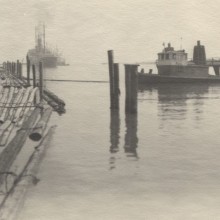 William Dassonville (1879-1957) was an American photographer.

Sometime around 1900 he joined the California Camera Club which at the time was a very active organization in the artistic community; holding lectures, trips and exhibitions. Camera Craft was the official magazine of the club and William Dassonville wrote his first article for the May 1900 issue entitled "Plantinotype Printing". At the end of that same year William Dassonville and Oscar Maurer decided to go into business and together they opened a portrait studio. Although this must have kept him busy, he still found time to create his artwork. He was involved in a number of exhibitions, including the American Photographic Salon in New York which traveled to numerous major cities throughout the US., and he was a resourceful member of the arts and crafts movement in California.

In 1906 the San Francisco earthquake destroyed William Dassonville's studio, but fortunately some of his work survived. He continued to do portrait work and other various assignments to earn a living while still creating his artwork, mainly platinum prints of landscapes in the pictorialist tradition. Over the years he built quite a name for himself as a portrait photographer and maintained a very active exhibition schedule. With the onset of World War One, there was a shortage of platinum printing paper. William Dassonville did research to develop an alternative paper coating. By 1923 he was coating high quality paper with a new silver bromide emulsion that had the tonal intricacy of platinum. He called his paper "Charcoal Black" and it was heralded by Ansel Adams, Imogene Cunningham and many others.