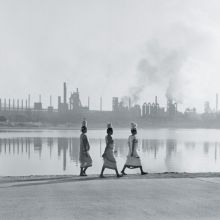 Werner Bischof (1916 - 1954) was a Swiss photographer and photojournalist.

From 1932 to 1936 Bischof attended the Zürich School of Applied Arts, where he studied photography with Hans Finsler. He worked as an advertising and fashion photographer for several years and in 1942 began a lifelong association with the Zürich magazine Du (“You”). Initially interested in still-life photography, he later turned increasingly to portraiture.

In 1945 Bischof photographed war-torn areas of France, Germany, and the Netherlands, and in the late 1940s he freelanced throughout Europe. After joining Magnum Photos (a photographers’ cooperative that then included Robert Capa, Henri Cartier-Bresson, David Seymour, and Ernst Haas) in 1949, Bischof continued to photograph on assignment for Life magazine and Paris-Match, among others. His work took him to India (where he movingly captured a famine in Bihar), Japan, Southeast Asia, Korea, the United States, and Latin America. A Magnum assignment, “Women Today,” which he had started in Finland, was the motivation for his travel in Latin America. He was killed when the car in which he was traveling went over the edge of a Peruvian gorge.