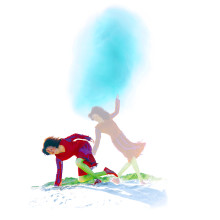 Of Lebanese and Belgian origin, THIERRY VAN BIESEN was born in Beirut in 1965. When he was 10 years old, the Lebanese civil war broke out and changed his life dramatically. In order to survive the horrors all around him, he suppressed the violence and developed a way of seeing that was unusually optimistic and uplifting. Little did he know that this selective filter would consciously be applied to his work years later.
At the age of 16, Thierry’s father sent him to Belgium in order to distance him from the war. A few years later, he landed at Polytechnic Institute where he was destined for a career in mathematics and engineering. It’s here that he first began to take photographs. The lab owner who processed his first roll of images was so impressed by his natural aptitude for composition and color that he encouraged him to nurture his innate talent.
In 1989, Thierry moved to New York to assist prestigious photographers Ralph Gibson, Sarah Moon, Duane Michals, Art Kane and Arthur Elgort. They gave him insight into their mastery and inspired him to think about his own visual style. Thierry then returned to Beirut where he opened his first commercial photo-studio with friend and world-renowned photojournalist Patrick Baz. The studio reinforced his technical skills and gave him the opportunity to shoot a wide range of subjects for advertising clients including KODAK, SEIKO, PLAYTEX, MARLBORO, TANG, PROCTER & GAMBLE and numerous local Lebanese businesses. In 1997, he moved to London to “play with the big boys.” It’s here that the realm of fashion photography offered him the opportunity to start cultivating his personal style and experimenting with a visual language infused with his signature buoyancy.
Thierry’s vision was instantly recognized, and he soon collaborated with major fashion magazines such as TANK, MINED, ELLE Japan, DON’T TELL IT, MADAME FIGARO, JALOUSE, DEALER DELUXE, IT, AD!DICT!, MARIE- CLAIRE, ZINK! And OMEN. The recognition that his fashion photography brought him attracted worldwide advertising clients including SONY, AMAZON.COM, FIAT cars, SOCIETE GENERALE, GUINNESS, CASTELBAJAC PERFUME, ISSEY MIYAKE, KATE SPADE, MACY’s, OLD NAVY, NEIMAN MARCUS, SHINSEGAE department stores in South Korea and CLUB MEDITERRANEE.
In 2000, his work was exhibited alongside Guy Bourdin, Patrick Demarchelier, Steven Klein, Nick Knight, Peter Lindbergh, Herb Ritts, Paolo Roversi and 50 others as part of the group exhibition “Archeology Of Elegance” at The Hamburg Museum Of Modern Art. Dealing with the correlation between art and fashion, the exhibition included the most succinct and influential photographers of the 80s and 90s.
Convinced that those who change the world for the better are the dreamers, not the cynics, Thierry continues to create imagery that vibrates with joy, movement and poetry.
Thierry is expanding the range of his work to include portraiture and still life. He currently splits his time between New York and Beirut.