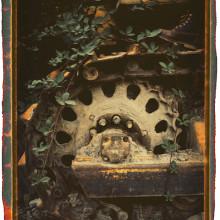 Aleskerov Sanan was born in 1956 in Baku, Azerbaijan on a joint of western and eastern cultures. He graduated from the Baku University, faculty of journalism.
He worked in different areas of photography - the scientific and applied photography, as photojournalist, as well as doing aerial photography and laboratory processing of aerospace materials. In creative photography prefers documentary-artistic understanding of the image.
He participated in more than 50 international exhibitions in 12 different countries. He had held six personal exhibitions in Azerbaijan, Georgia, France, Great Britain, and Kazakhstan and had won many FIAP awards (International Federation of Art Photography by UNESCO). Thrice was named "Photographer of the Year" by the Federation of Azerbaijan photographers. Sanan closely works with and exhibits together with prominent artists of Azerbaijan.
His works can be found in the Photographic Library in Surrey, Great Britain; Baku Art Center, Modern Art Museum in Baku, Azerbaijan; Ars Aevi Museum of Contemporary Art, Sarajevo. He is widely represented in private collections in the USA, Turkey, Russia, Austria, Britain, Norway, and France.
In 2012, represented the country in the «Fly to Baku» art project organized by Heydar Aliyev Foundation in London, Paris and Berlin.
During 20 years of his 35-year old professional practice he had extensively used Fujifilm equipment and Fujifilm materials.
Currently, he is a freelance photographer and private tutor.

AT THE KISH RIVER